Inspector Hobbes and the Bones (Unhuman #4) by Wilkie Martin 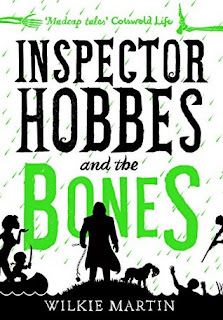 Inspector Hobbes and the Bones (Unhuman #4)

There’s going to be trouble. Andy Caplet’s wife goes away, someone is out to get him, and he loses nearly everything in a storm. Amazing both himself and his unhuman friend Inspector Hobbes, he heroically rescues flood victims and uncovers something shocking.
Is Andy being set up for blackmail by the apparently charming young woman who attempts to seduce him, or is something even more sinister afoot? Hobbes certainly believes so, and he’s getting worried.

This is the fourth in Wilkie Martin’s unhuman series of cosy comedy crime fantasies.

I haven't read the previous three books yet, as I received this book from Netgalley and the publisher in exchange for an honest review. Normally, I don't enter a series in mid-swing, but with this one I simply didn't have much choice. Despite myself being thrown in the cold water, the author did a good job of including details from past books (without giving away too much either), and I never felt like I was missing out on too much. If anything, I've been left with a desire to find out more about the origins of the characters and to find out about past cases which were mentioned in this book.

The characters are well thought out and charming. Inspector Hobbes is definitely a smooth operator and loves 'bending' the rules in order to get his man. I felt bad for poor Andy, as he certainly had the universe working against him at every turn in this book. 'The old gal' (Inspector Hobbes' cook), was also a hilarious character but also kind of scary at times. Again, it makes me want to read the previous books to find out more about these characters.

The plot was twisty and filled with lots of hilarious encounters. Again, poor Andy!
I didn't have the feeling that too much had been given away, nor did I see the ending coming before it was there.

I really believe, that readers interested in crime, supernatural elements, the undead, and easy going quirky books will absolutely love this one!! Despite joining the series on book four, I thoroughly enjoyed the story. The book definitely works as a stand-alone as well. Since reading this book, I've purchased the first book in the Unhuman series, 'Inspector Hobbes and the Blood'. I look forward to starting the series at book one, and will certainly leave a review on Goodreads and my blog.

Eric John Overkamp
Hi. Thanks for reading my bio. I am an ex- criminal investigator for the US Department of Defense, who has decided to answer my calling to continue studying Theology and to find my home in the church. I have fallen in love with books from the very first moments my parents read to me. In turn, it is has become extremely important to me to spread literacy in our world as well. I am a proud member of The International Reading Association (Intl Literacy Association) and do my part in helping others read (especially our little ones) in Europe and the Balkans. I mainly review books on Amazon and Goodreads now, as it has the chance to reach even more potential readers. I have begun the large project of back-reviewing some of the books that I've read in the past on Goodreads as well. The genres that speak to me the most are : YA, Sc-Fi & Fantasy, Mystery & Thrillers (who doesn't love a good mystery, right!?), Alternate History, Religion (Christian and Catholicism), and Adult Fiction. Thanks for stopping by, Eric